Buying a house in the desert? Here’s what to expect 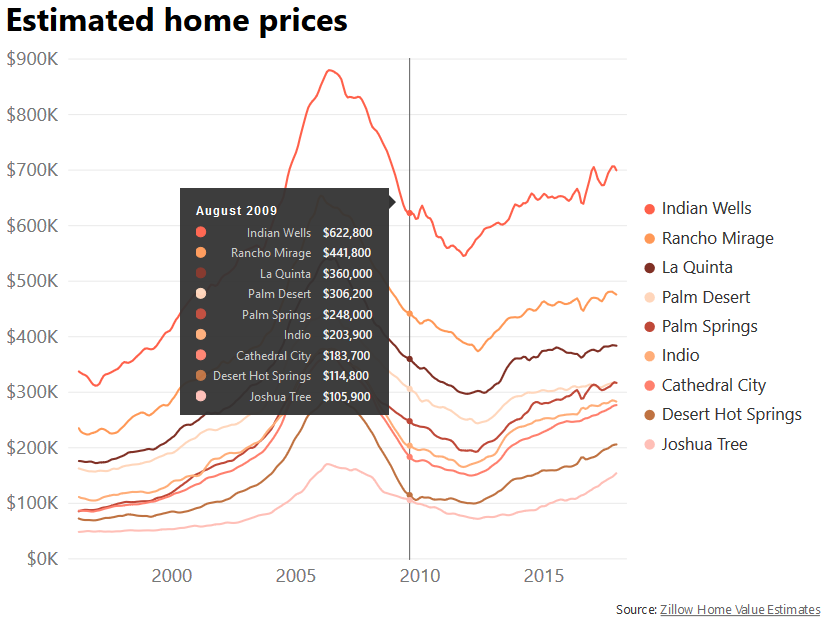 Much like the rest of the nation, the communities of the Southern California desert saw home values plummet in the wake of the 2008 recession. But while sale prices in Los Angeles County have since returned to their pre-recession peaks, that hasn’t happened in the desert—yet.

The market is picking up, though, and real estate agents in the area say they’re optimistic that trend will continue. That’s good news if you already own a home there; if you don’t, but would like to, it means you’ll have some tough decisions to make about what you are looking for and how much to invest.

The bargain days are over

The pace of life in the desert may be slower, but home prices there are accelerating quickly. Across the region, the value of homes has soared in recent years.

“People want to come out and spend $100,000 on a junky cabin and fix it up,” says Madelaine La Voie, who operates realty offices in the cities of Joshua Tree, 29 Palms, Morongo Valley, and Pioneertown. “But that was two years ago. You can’t find that anymore.”

In Joshua Tree, home values more than doubled over the past five years. In Desert Hot Springs, they’re up more than 80 percent. Cathedral City (64.9 percent), Indio (52.4 percent), and Palm Springs (49.4 percent) also saw huge gains during the same period, according to data provided to Curbed by Zillow.

The number of homes buyers have to choose from is also declining, helping to drive up prices. According to Zillow, inventory (the number of homes on the market) dropped at least 10 percent last year in Palm Desert, Palm Springs, La Quinta, Rancho Mirage, Joshua Tree, Indian Wells, and Cathedral City.

But fewer options and big jumps in price aren’t deterring buyers. The typical house in the greater Coachella Valley area now sells in about 65 days—down from nearly 100 days less than two years ago, according to the Palm Springs Regional Association of Realtors.

“It’s not like other markets where almost every sale is going to be multiple offers,” says real estate agent Paul Kaplan, who specializes in midcentury modern properties in Palm Springs. “It’s not that crazy—but we do have our share of that.”

Homes are selling fast enough that Los Angeles-based real estate firm Halton Pardee + Partners is planning to open an office in Palm Desert. Tony Halton, who will lead the office, says he’s had his eye on the area for some time.

“I’ve watched this market slowly start building momentum,” he says. “We figure the timing is right.”

The desert isn’t just for retirees

Long before events like Coachella, Modernism Week, and the Palm Springs International Film Festival brought throngs of young revelers and social influencers to the desert, the area was a perfectly respectable place to chip away at one’s 401(k) and escape the winter weather. And, really, it’s still that way today.

Halton insists the area feels like it’s getting “a little younger.” He says that “it’s a wider mix of people. It’s not just people retiring and looking for a place to live in a club where they can play golf.”

La Voie says that younger, creative types are flocking to the area, and that some of them are even choosing to stay year-round.

Halton agrees that opportunities for employees to work remotely have made it possible for more people to live in desert communities far from Southern California’s major job centers.

But older residents still make up a majority of the population in many desert cities. In Palm Springs, more than 68 percent of residents are older than 40; in upscale Indian Wells, about 94 percent have reached the four-decade mark.

The median age in those two cities—along with Rancho Mirage, Joshua Tree, La Quinta, and Palm Desert—has actually increased since 2000. In Indio, which has nearly doubled in size over the past decade and a half, the typical resident was a youthful 27 in 2000. Today, the median age there is just over 40.

Some cities are more youthful than others. In Cathedral City, the median age is just under 36 (around where it is in LA County). In Desert Hot Springs, it’s less than 32.

Opportunities for remote work aside, the desert still attracts a very high number of buyers looking for a vacation home or part-time residence.

In many desert cities, more than one-third of houses are vacant, meaning their owners don’t live there year-round—or rent them out to long-term tenants. That’s particularly true in the wealthy enclaves of Rancho Mirage and Indian Wells, where more than 40 percent of homes are vacant.

By comparison, only 6 percent of homes in Los Angeles County were found to be vacant in the 2016 American Community Survey.

As a result, Halton says things get very quiet in the summer, when temperatures routinely hit triple digits and visitors disappear. Still, he says that’s starting to change—a little.

“I think our season is a little longer,” he says. “In Palm Springs they [used to] board up the buildings and everyone would take the summer off. Now you’re seeing places staying open all summer.”

What you need to know about vacation properties

If you’re hoping to invest in a bit of desert real estate to cash in on the area’s popularity with vacationers, make sure you know what you’re getting into.

In Palm Springs, for instance, new laws strictly limit the amount of time you’ll be able to offer up a property for short-term rental using websites like Airbnb. Meant to cut down on raucous parties in residential neighborhoods, and to keep rental properties available for permanent residents, the rules ensure that landlords can only rent out one property at a time, with each unit capped at 36 rentals per year. Building owners also have to apply for a license to rent out units and either meet each guest on-site or send a property manager to do so.

Palm Springs has the most restrictive set of regulations, but other cities, including Yucca Valley and unincorporated areas of Riverside County, have their own sets of rules. These often impose quiet hours and limits on the number of guests that can stay in each rental.

La Voie says that buyers also get into trouble by not understanding local land-use laws.