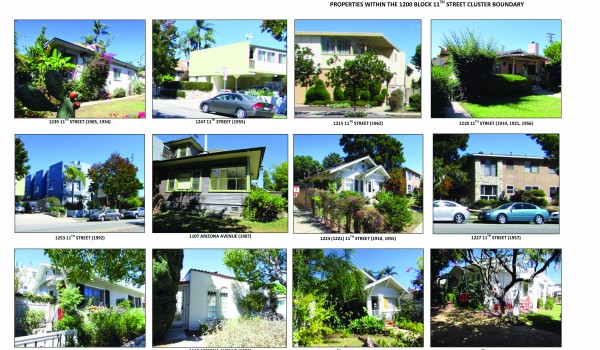 The Landmarks Commission has delayed a vote on whether to support establishing an historic district on 11th Street after the flu benched two key members of a coalition to save the Mid-City neighborhood bungalows. On Monday, the Historic 11th Street Coalition asked for a postponement until February, but the delay will likely last longer because the commission’s next few agendas are already packed.

“It’s really been a horrible cold, flu, whatever it is,” said a hoarse Diane Miller on the phone from her house Tuesday. Miller’s co-chair on the board, Susan Suntree, also became ill this week (California officials are warning this could be the worse flu season in years). After a thirty-year effort to establish the district, the two women were devastated to become sick just before they were ready to make their presentation to the commission.

In the 1920s, California craftsman bungalows filled the stretch of 11th Street between Wilshire Boulevard and Arizona avenue as blue and white-collar workers set up house blocks from the beach. Nearly one hundred years later, only a small cluster remain amid large-scale apartment buildings and condominiums. Many of them have seen significant remodels and upgrades over the years as ownership changed hands.

“They tell a story of a time that’s gone by when the middle class and workers could actually buy a home,” Miller said. The designation of an historic district would preserve the small houses for future generations. The coalition see their preservation as part of the fight against the “mansionization” of Santa Monica amid skyrocketing real estate prices. They even commissioned their own 100-page report supporting the district.

“There is no other extant cluster of the city’s original bungalows built by the first middle-class residents of the original city of Santa Monica,” the report says.

While Miller and Suntree recovered from the flu Monday night, the commissioners heard the opposite viewpoint: a city-commissioned report found the properties lack architectural merit, association with important people and historical integrity. The report by Ostashay and Associates Consulting found just two of the bungalows may qualify as Structures of Merit, a California Craftsman at 1223 11th Street and a cottage at 1107 Arizona Avenue.

After a lengthy discussion, the commissioners continued the item to allow further research into the importance of other resources on 11th Street. Commissioner Rush Shari told the Daily Press they also felt it was important to hear from Miller and Suntree before voting on the item.

“Staff informed the Commission that upcoming agendas are full at this time, and it will take some time to put together the additional information requested,” said design and historic preservation planner Stephanie Reich. “It may be a few months before this comes back before the Commission.”

There are currently three historic districts in Santa Monica: a cluster of craftsman buildings on Bay Street, the Third Street Neighborhood and the San Vicente Boulevard Courtyard Apartments. The City Council has the ultimate say on whether an area should be deemed historic.