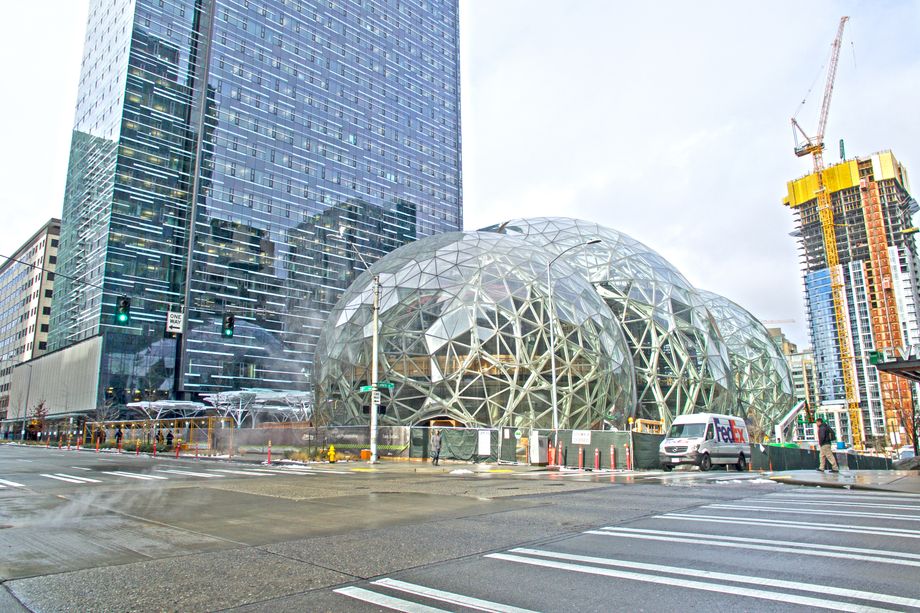 The New Year always brings a multitude of housing predictions. Over the next few days, I’ll be re-posting various articles with their own takes for 2018 housing trends. Sometimes, the various posts will agree, and other times, they’ll differ (interest rates are always a hot topic of speculation, for example).

What do you think about these trends? Let us know in the comments!

The Urban Land Institute’s annual look at the year ahead predicts a “smooth landing,” a booming Seattle, and technological change

In its annual look ahead, the Urban Land Institute predicts a soft landing. That may seem totally tone-deaf when considering today’s news cycle and the overall tumult of 2017 thus far. But as far as the real estate industry is concerned, the immediate future promises a relatively smooth ride.

Unveiled during the organization’s annual fall meeting in Los Angeles this morning, the 2018 Emerging Trends in Real Estate report, a joint project between ULI and PricewaterhouseCoopers researchers, compiles more than 800 individual interviews and 1,600 surveys from a diverse array of real estate, economic, and development professionals.

It’s been anything but a slow year, with an expanding affordable-housing shortage, cries of a new urban crisis impacting cities, a string of tragic and costly natural disasters, and new regulatory and tax uncertainty due to proposed Trump administration policy.

But the consensus of real estate experts and analysts surveyed by ULI views a “sudden drop in altitude” as highly unlikely. Growth trends and an economic tailwind suggest an expansion of the current cycle, amid larger structural shifts in real estate.

The housing shortage offers opportunities (to whomever can figure it out)

Forget new billion-dollar tech startups: The real unicorns in today’s economy may be mid-priced single-family homes that a cross-section of buyers can actually afford. No segment of the housing market has so many potential buyers, just no scalable solution remains so elusive, due to a number of economic factors. Experts zeroed in on this difficult, yet in-demand housing as perhaps the most valuable, and vexing, product to develop.

Whether it’s urban row houses, transit-oriented development, or a new type of tract housing, practical and affordable mid-market homes, as well as starter homes and affordable rental units for young adults, remain potential goldmines for developers who figure out the right balance of price, land costs, location, and amenities. The higher-end market remains well-served. While margins are still good for those types of projects, building affordable housing at scale, in nearly any urban market in the country, would be welcome.

Soft landings: Is this economic cycle fading instead of flaming out?

Are fears of another recession or crash misplaced? The regular economic cycle suggests the U.S. economy is due for a correction, yet, according to experts cited in the trends report, the immediate future may resemble a smooth-glide path as opposed to a nose dive. Most investors have lived through a few hard landings in the recent past—the savings-and-loan collapse of the ’80s, the dot-com bubble, and the Great Recession—but this time, many see something different.

Many in the industry point to signs, such as the very low unemployment rate, a policy shift toward tightening at the Fed, and high asset prices in real estate, as positive indications that investors are getting more defensive and conservative as the cycle stretches out. By achieving more balance, the market may have reached a “new normal” of slow and steady growth.

Productivity—both as a social imperative and a business necessity in an ever-tightening labor market—has put more and more pressure on office workers, and offices, to perform. Developers and commercial-property owners need to focus on providing not just space and a great location, but an environment for success.

As office design morphs into more mixed workspaces, and the tech world fetish for innovation, creative commons, and innovation bleeds into every sector of the economy, more and more firms want curated, configured office spaces that boost productivity. Developers who focus on and market design and efficiency, and tailor their products to ever-evolving workplace trends (flexibility, green design, smart office space), will benefit greatly.

Procession of the generation: Gen Z joins the fray

Tired of trend stories about how millennials are reshaping the housing market? Thankfully, a new demographic has emerged on the radar of economists and trend forecasters, ready for its own moment under the microscope. Gen Z, defined variously as the generation born starting anywhere from 1995 to 2001, is predicted to hit the post-college housing market in much the same way as millennials, loaded with debt and preferring a more urban lifestyle. They’ll also enter the working world looking for structure and stability; researchers suggests they’re both more competitive and more easily distracted.

But before they make their full impact felt in the office or housing markets, they’ll likely have a much greater effect on retail and shopping. Their “gadgeteria” ethos and social-media second nature will put more and more pressure on retailers and retail landlords to create experiential stores with connectivity that respond to individual preferences.

But don’t forget the baby boomers: The cresting “silver tsunami”

Initial predictions that the baby boomers would already be retiring en masse at fancy retirement communities and active lifestyle developments have given way to a more complicated reality, shaped in large part by fallout from the Great Recession. Additional loan burdens and a lack of financial planning and savings have put many boomers in an awkward position, causing some to delay retirement. A 2016 survey showed that 37 percent of boomers had less than $50,000 in savings.

While the high end of the market will seek out urban living, an active lifestyle, and luxury rentals, many others will scramble to locate affordable housing options fit for aging in place. Real estate professionals will need to overcome a number of challenges to capitalize on this huge market, one that survey participants said was one of the most promising residential sectors in 2018, including helping many boomers sell their large homes (which may not have the amenities millennials want), and then helping them downsize or find affordable housing options for their golden years.

By 2030, 75.5 million Americans will be over the age of 65, with a vast diversity of needs, financial situations, and lifestyle preferences. Other than its vast size, this is a market that defies easy categorization.

It’s different this time: Secondary markets refuse to be afterthoughts

Secondary markets in the U.S. have outpaced the primary cities, at least according to survey results from the Urban Land Institute, leading analysts to suggest there’s a lot more staying power here than years past. The reasons are varied: Investors are better educated, secondary markets haven’t become as overbuilt as they were in previous cycles, foreign capital has grown and seeks a safe home, and the growth in many of these cities seems much more sustainable and long-lasting. After lagging behind in the recovery, secondary markets seem poised for growth and continued appreciation, making it a good time to invest.

When it came to predicting where investment and growth are headed, analysts favored so-called second cities. The report’s predictions for the hottest markets of 2018 favored many secondary markets, with Seattle surging on Amazon-backed growth to a top ranking. Miami also made a huge jump from 25 to 11 in the rankings. Primary markets took a beating, with only LA and Boston in the top 10, and both San Francisco (27) and Manhattan (46) taking steep drops.

Is housing at a technological tipping point?

The oft-dismissed sci-fi nature of high-tech construction, such as prefab homes and 3D printing, has progressed beyond mere hype and hope. With demand rising and ever-present labor shortages showing no signs improving soon, new technologies, and the efficiency, progressive workflows, construction automation, and processes they can bring, will be embraced by the industry. While many worksites are just beginning to benefit from improved worksite tech, better workflows, and safer job sites, extensive activity on the fringes of the homebuilding industry suggests a more impactful breakthrough is imminent.

Retail transforms and stores remain: Staying ahead of transformation

Experts may argue about the true depth of the retail apocalypse, but there’s no denying retail real estate is undergoing a fundamental shift. While U.S. retail sales continue at a long-term annual growth rate of 4 to 4.5 percent, many stores struggle as foot traffic declines, e-commerce rises, and generational and consumer shifts change expectations of the shopping experience.

ULI researchers offer five trends shaping the future of retail real estate: department store deconstruction and obsolescence, overall retail industry maturity, fundamental changes in apparel manufacturing, changes in consumer demographics and preferences, and advances in retail technology, including e-commerce. There’s still plenty of capital and investment in this mostly healthy sector, the report notes, and brick-and-mortar will remain dominant in distribution. But investors and landlords need to adapt and consider ways to update their spaces and strategies in a fast-moving environment.

Tax reform and its potential impact on real estate

While tax reform, at the present moment, still has a lengthy road to legislative success, the proposed overhaul has numerous potential impacts on the real estate world. Many suggested cuts and changes bear close watch by the real estate industry. Low-income housing tax credits (LIHTCs) may be on the docket, an extremely troubling development for affordable housing. Other proposals to double the standard deduction on personal income, alter investment amortization, and get rid of the 1031 tax-free exchange program would add disruptions and numerous potential ripple effects.

Losing LIBOR and replacing the yardstick

LIBOR, the London Interbank Offered Rate, is an international standard used around the world, including the U.S., as a benchmark for lending and mortgages. To offer a sense of its importance, $350 trillion in financial instruments use LIBOR as the benchmark for transaction pricing and interest rate adjustment (global GDP was estimated at $75.7 trillion in 2016 by the World Bank). It’s a big deal, especially since, due to a rate-rigging scandal that was uncovered during the Great Recession, the standard will be phased out between now and 2016.

That titanic shift means a lot, in both the short term and long term. It will require quickly rewriting many contracts, an important task that will consume numerous real estate lawyers’ time. It’ll also potentially put downward pressure on interest rates, according to the report, since many suggested replacements have been substantially lower. This is a big shift, no matter how much it directly affects any one firm or deal.