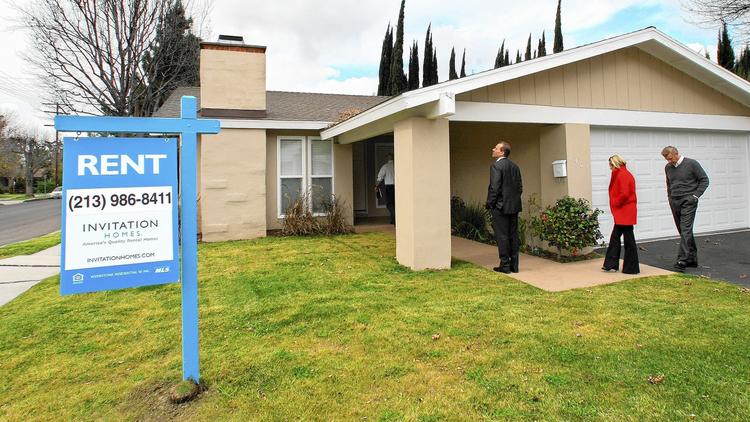 The deal comes as home prices have risen across the country, and it reflects the difficulty that such giant rental firms now have in growing. Gone is the wave of cheap foreclosures that propelled their rapid expansion early this decade, prompting consolidation within the industry.

“This merger creates the leading single-family rental company in the United States, which will be uniquely positioned to deliver exceptional service to residents, while also improving operating efficiency,” said Fred Tuomi, chief executive of Starwood Waypoint, who will lead the new firm under the Invitation Homes name.

As home prices have risen, the companies have significantly slowed their purchases, especially in high-cost markets such as California, which was an early center of their buying sprees. Analysts say the companies are now increasingly focused on managing their holdings.

The desire to grow has partly been driven by a desire to concentrate properties in certain markets, so home management and maintenance can be done more efficiently, according to a report last year from Keefe, Bruyette & Woods Inc.

The deal between Invitation Homes, controlled by private equity firm Blackstone Group, and Starwood Waypoint, gives the new firm a concentration of houses in the West and Florida.

Combined, the two companies have about 82,000 homes, more than 12,700 of which are in California. Still, the company’s portfolio would just be a sliver of the nearly 16 million single-family homes for rent in the United States.

Historically, the single-family rental industry has been dominated by mom-and-pop landlords. But in the wake of the subprime crisis, large Wall Street firms such as Blackstone rushed into the market to acquire homes at rock-bottom prices.

The rush of investors was credited with helping home prices recover in some markets. And at the time, there was debate whether the companies were in the business for the long haul, or if they would quickly unload their homes as soon as prices rose.

“The question was is this a trade or is this a business,” said Kevin Dwyer, an analyst with Morningstar. “This is a business. … I would be very surprised if they all went away.”

Based on Wednesday’s closing prices, the new company would be valued at $11 billion.

Shares of both companies were up in early afternoon trading.