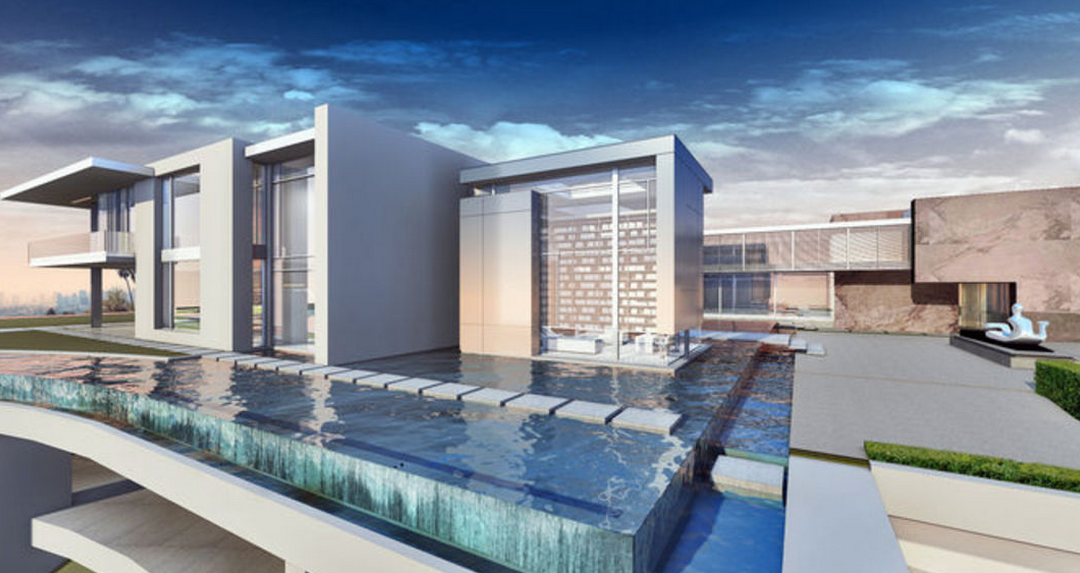 One of the biggest homes in U.S. history is rising on a Los Angeles hilltop, and the developer hopes to sell it for a record $500 million.

Nile Niami, a film producer and speculative residential developer, is pouring concrete in L.A.’s Bel Air neighborhood for a compound with a 74,000-square-foot (6,900-square-meter) main residence and three smaller homes, according to city records. The project, which will take at least 20 more months to complete, will exceed 100,000 square feet, including a 5,000-square-foot master bedroom, a 30-car garage and a “Monaco-style casino,” Niami said.

“The house will have almost every amenity available in the world,” he wrote in an e-mail. “The asking price will be $500 million.”

Estates with views of the Los Angeles basin are the California counterpart to Manhattan’s penthouses or London’s Mayfair manors, drawing a global cast of financiers, technology tycoons and celebrities who collect trophy homes like works of art. Around the world, five properties sold for $100 million or more last year, and at least 20 others have nine-figure asking prices, Christie’s International Real Estate reported last month.

The priciest home ever sold was a $221 million London penthouse purchased in 2011, according to Christie’s. The most expensive properties on the market include a $425 million estate in France’s Cote d’Azur, a $400 million penthouse in Monaco and a $365 million London manor.

Whether Niami can get more than double the previous record for his mansion remains to be seen.

“I’m skeptical,” said Jonathan Miller, president of appraiser Miller Samuel Inc. and a Bloomberg View contributor. “My first reaction is laughter. But we’re in this perpetual state of surprise as new thresholds are broken.”

Niami’s project, on a 4-acre (1.6-hectare) hilltop lot, will have 360-degree views of the Pacific Ocean, Beverly Hills, downtown Los Angeles and the San Fernando Valley. Plans called for removal of almost 40,000 cubic yards (30,600 cubic meters) of earth, the equivalent of an American football field covered by 20 feet (6 meters) of dirt.

“It’s a jaw-dropping property,” Billy Rose, president of Beverly Hills-based brokerage Agency, said in an interview. He isn’t affiliated with Niami. “What he’s looking to build will be the everything house on the premier site in L.A.”

The average price of 37 homes sold in the first quarter in the Bel Air-Holmby Hills area of Los Angeles was $5.29 million, down 27 percent from a year earlier, when there were several “super deals,” according to an Agency report.

Los Angeles luxury homes have ballooned in size in the past 30 years, said Peter McCoy, contractor for a 53,000-square-foot mansion under construction on a Bel Air hilltop visible from Niami’s project.

“We used to think 18,000 or 20,000 square feet was massive,” said McCoy, who became a builder after working as chief of staff for former First Lady Nancy Reagan. “The guys that are doing spec homes, they’re all sitting there hoping to hit a home run. You’ve got to be a big risk-taker, to like building big homes rather than going to Las Vegas.”

Construction costs for Los Angeles luxury homes average $700 to $800 a square foot before finishings and furniture, McCoy said. Niami, who wouldn’t discuss his sources of funding, has plans that call for four swimming pools, including a 180-foot infinity pool, and about 20,000 square feet of grass. That grass will most likely be synthetic, Niami said.

There are a “lot of things” in the house that will help to preserve water as California suffers from a record drought, Paul McClean, the mansion’s architect, said in a telephone interview.

“But those are things that correspond with luxury houses, and I can’t tell you that it’s a green and energy-efficient house,” he said.

McClean, who also designed a 14,000-square-foot spec house down the hill from Niami’s project, is known for creating sleek hillside mansions sold to entertainers and technology executives such as Tyler and Cameron Winklevoss — an enlarged, updated interpretation of the style pioneered by 20th-century Southern California modernist architect Richard Neutra. McClean said he studied commercial buildings such as hotels, museums and art galleries for his latest design.

“It’s very similar to a palace,” he said. “The house is about public functions rather than domestic living.”

Niami’s mansion is set to be the largest built in the U.S. this century, surpassing Versailles, a 90,000-square-foot chateau in Windermere, Florida, under construction for David Siegel, founder and chief executive officer of Westgate Resorts.

Notable residents of Bel Air, which is north of Sunset Boulevard and the University of California, Los Angeles, campus, include Tesla Motors Inc. Chief Executive Officer Elon Musk. President Ronald Reagan lived in Bel Air after leaving the White House, which has a floor area of 55,000 square feet.

A 258-acre Bel Air plot permitted for 18 homes is listed with an asking price of $125 million, according to Aaron Kirman, a John Aaroe Group agent who has the listing for the development land.

“Bel Air is the ultimate trophy,” he said.