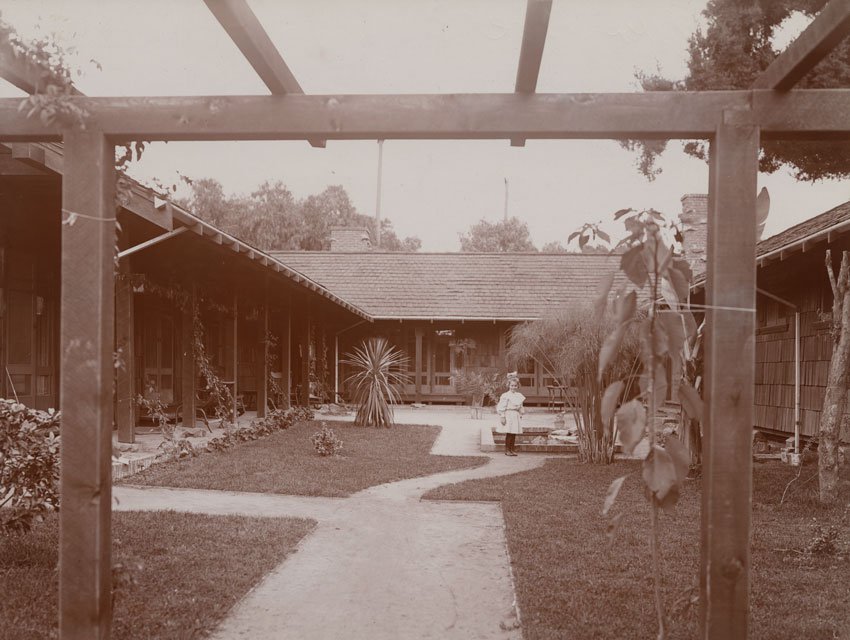 Revered architects Greene & Greene built the house in a nascent Hollywood. For years its fate would be a mystery to all but a few.

n a fall afternoon in 1971, Gail Hartwig and her husband, Don, drove out of their farm, northwest of Edmonton, Canada, to run an errand. As they rode along, a goat in the back of the family pickup truck peered over the tailgate, craning its neck to get a better view of the passing scenery. The goat, a recent prizewinner at the local fair, was being delivered to Gail’s friend Carol Turner. “Such is the life of country people,” Gail says today with a laugh. They had agreed to meet in Mill Woods, about 40 miles south of the Hartwigs’ home, at an old house that Carol’s father, Ernie, was tearing down for scrap.

Pulling into the driveway, Gail saw little reason to mourn its impending demise. Painted a sickly yellow brown with fire engine red trim, the house had been derelict for years and looked it. Vandals had shot out many of the windows, and Ernie had already dismantled the rear portion, leaving only three rooms intact. As Gail went inside, her pupils needed a moment to adjust to the darkness. Then everything came into focus. There, illuminated by shafts of light streaming through broken windowpanes, was a room Gail could only describe as “awesome.” The space seemed enormous, an effect heightened by a magnificent vaulted ceiling clad in Oregon pine. The walls below were similarly paneled and, despite their grime, gave off a warm glow. On her left was a handsome stone fireplace, and at the far end of the room, presiding over an inglenook, was an imposing trestle beam.

She found the same kind of extraordinary craftsmanship in each of the rooms, all of them richly paneled and with beautiful handmade doors inlaid with strips of opalescent glass. She was transfixed. “It was just so unique,” Gail says. “There was nothing like it. There was no way I was going to let all this wind up on a scrap heap,” she says. “Certainly not without a fight.”

Emerging from her tour of the home, she looked at Ernie and asked, “How much for the lot of it?” Both he and Don were taken aback. “Sorry, Gail,” Ernie countered. “It’s all spoken for.” Gail was not so easily dissuaded. A spirited haggling session commenced. “It was irresistible-force-meets-immovable-object,” she says. After a lengthy back-and-forth, Gail had talked Ernie into letting her have at least one of the rooms—not the living room as she’d hoped but the original master bedroom, a beautiful space on its own, fully paneled and with a large bay window. She also acquired five of the art-glass doors as well as other architectural elements.

The former Cora C. Hollister House in the 1960s, after it had been moved a second time, to the Mill Woods area of Edmonton, Alberta, Canada.

Gail’s idea was to use the historic room as the centerpiece of a new house. She and Don had long ago outgrown their current home on what they called Centana Farm, and during the return drive they were already laying the groundwork for the project.

Although they had no way of knowing it, the Hartwigs had bought a remnant of the Cora C. Hollister House, a Craftsman-style bungalow built in 1904 by Charles and Henry Greene, two of Southern California’s most admired and transformational residential architects. “In their 20 years of practice,” wrote the late Greene & Greene historian Randell L. Makinson, “they established an American architecture so fresh that it spread from Pasadena to all of Southern California and then over the entire country as the ‘California Bungalow’ style.” Artists in the truest sense of the word, the brothers created whole environments—livable spaces that harmonized with their surroundings. In the early 20th century, Greene & Greene had a thriving practice in Southern California, designing landmark Arts & Crafts residences like the Gamble and Blacker houses in Pasadena, the town in which their firm was based.

– See the rest of the original article at L.A. Magazine