Home sales, as well as rent prices, on the rise 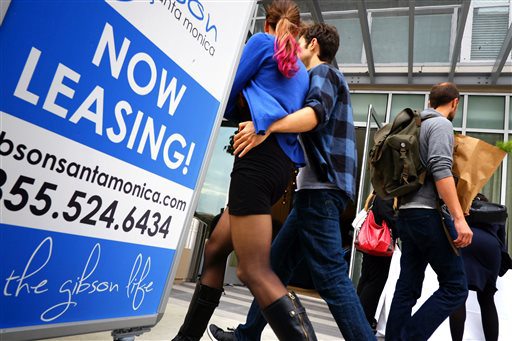 WASHINGTON (AP) – U.S. homebuyers flooded back into the real estate market in March, pushing up sales and prices at the start of the spring buying season.

Home purchases recovered after setting a weak pace in January and February, when an extremely cold and snow-filled winter cut into purchases. Relatively low mortgage rates and robust hiring has raised expectations that sales will improve after slipping slightly in 2014.

But the surge in sales has yet to cause a meaningful increase in listings. The market has just 4.6 months of supply, compared to six months in what economists consider to be a healthy market. The limited supplies have caused prices to rise at a level that hurts affordability. Median home prices increased 7.8 percent over the past 12 months to $212,100.

Real estate continues to recover from a housing crash that triggered the 2008 financial crisis and dragged down prices through 2012. But the sluggish pace of the recovery has prevented wages from rising significantly, which has put homes out of reach for many as prices head higher. Many potential sellers are still underwater on their mortgages, meaning that they owe more than their home could fetch in a sale. This restricts the number of listings.

The March sales rate topped 5 million for the first time this year – and suggests that sales should improve from the total of 4.94 million in 2014. Still, in a healthy market, sales would average roughly 5.5 million a year, economists say.

Home rental prices are soaring in San Francisco, while pockets of the Midwest and South are also posting big annual increases.

The influx of tech money fueled San Francisco rents up 14.8 percent, while nearby San Jose jumped 12.3 percent. Rents average more than $3,000 a month in these areas. That’s roughly $600 more than rent in the Los Angeles area, $800 more than metro New York City, and $1,000 more than the Washington, D.C. area.

Prices are also climbing in cities without the same hype from startups and venture capital. Rents rose more than 8.5 percent over the past year in Denver, Louisville, Kansas City and Nashville, among other metro areas. In many cases, demand for apartments and rentals have outstripped the available supply of rental homes and apartments, causing prices to rise.

But other major cities are seeing a glut of rental properties. Prices have fallen over the past year in six of the United States’ 100 largest metro areas, including Chicago, Minneapolis, New Orleans and Rochester, New York.

More Americans have shifted to renting in the wake of the 2008 financial crisis and the housing bust, which caused an avalanche of foreclosures that depressed prices through 2012.

At the end of last year, 36 percent of Americans rented. That’s up from 31 percent before the Great Recession, according to the Census Bureau.

Even though home prices have steadily recovered, the monthly costs of ownership remain cheaper than renting.

The monthly payments from owning a three-bedroom house are cheaper than renting a comparable property in 76 percent of U.S. counties, according to the housing data company RealtyTrac. The analysis released in April examined 461 counties with at least 100,000 people and sufficient housing data.

“From a pure affordability standpoint, renters who have saved enough to make a 10 percent down payment are better off buying in the majority of markets across the country,” said Daren Blomquist, vice president at RealtyTrac.

But incomes have failed to keep pace with the rise in home prices or rents, making it difficult for many to save for a down payment. Average hourly wages have risen just 2.1 percent over the past year.